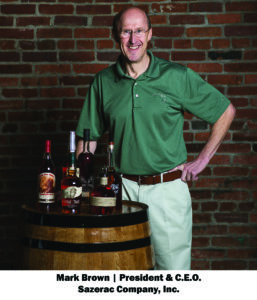 The ABL Top Shelf Award, the highest honor presented by America’s beer, wine and spirits retailers, recognizes those who have demonstrated professional excellence in the beverage alcohol industry, and have had a positive influence in their community.

Brown got his start in the beverage alcohol business at a relatively young age when he began working in his family’s pub business in the United Kingdom in 1971.  In 1976, Brown joined British alcohol cider-maker H.P. Bulmer as a salesperson, and by 1978 was Sales Trainer.  He came to the United States in 1980, operating as the U.S. Field Sales Manager for Bulmer. From 1981 to 1992 he served as Director of New Products, National Sales Manager and, eventually, Vice President of Sales and Marketing with Sazerac.

Brown left Sazerac and joined Brown-Forman (no relation) as Senior Vice President and COO of the Select Brands Group for two years.  He then spent the next three years as President of the Advancing Markets Group, before returning to Sazerac in June 1997 in his current role as President & CEO, where the company’s portfolio includes brands such as Fireball Cinnamon Whiskey, George T. Stagg, Pappy Van Winkle, Sazerac Rye, and Southern Comfort.

“Mark Brown is synonymous with the beverage alcohol industry – an industry that Mark has been a part of not just professionally for more than 30 years, but really for his entire life,” said ABL President Steve Morris. “ABL is honored to present Mark with the 2018 Top Shelf Award in recognition of his dedication and commitment to the thriving three-tiers of the industry and the community surrounding his adoptive home of New Orleans.”